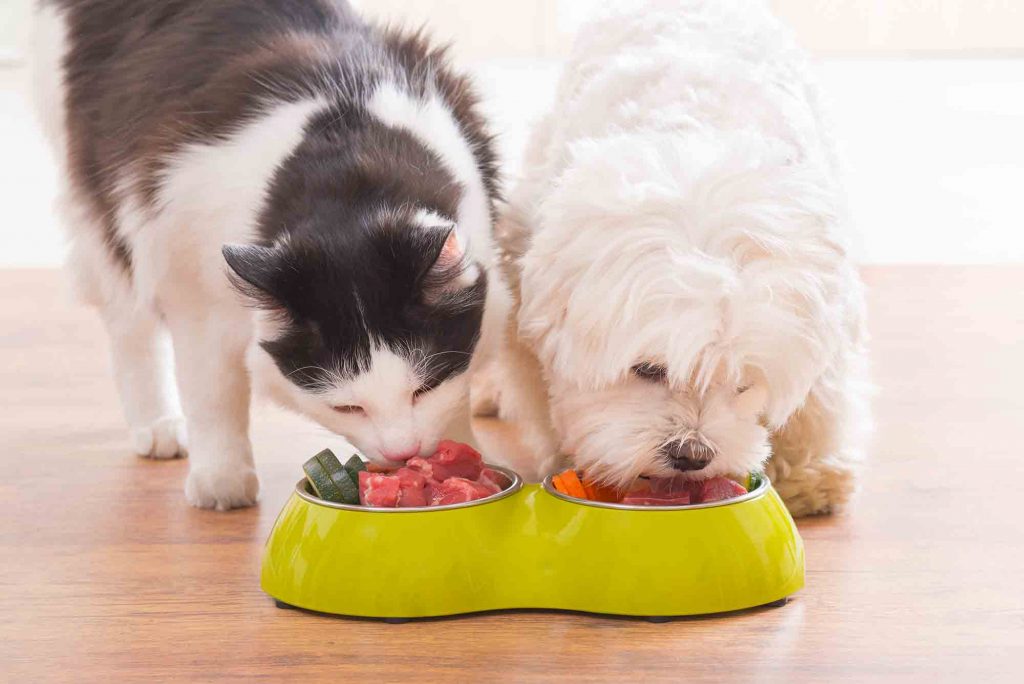 Much like any diet fad, raw meat based diets (RMBD) abound with reasons why they are healthier than cooked varieties.

Advocates of RMBDs. as well as the companies selling them, dazzle prospective buyers with anecdotal language that may include ‘biologically appropriate,’ ‘ancestral food source,’ or insinuate that they’re somehow healthier because of its
compatibility with the wolf’s diet.

I admit, the compelling language can be fascinating. Unfortunately, there’s no science to back it up. There are, however, numerous scientific studies verifying the critical flaws in RMBD. For example, in a European study (Dillitzer et al, 2011) that evaluated 95 homemade raw diets by calculating twelve important nutrients such as calcium, phosphorus and vitamin A, scientists revealed serious excesses or deficits in those nutrients.

As far as bacteria is concerned, raw meats are a veritable breeding ground for Salmonella, E. coli 0157:H7, Clostridium, Campylobacter, Listeria among others. This even includes food that is human-grade, previously frozen and freeze-dried.

One Canadian study found that 21-percent of all RMBDs tested were contaminated with Salmonella and that the bacteria was resistant to 75-percent of the antibiotics tested (Finley et al, 2008).

The American Veterinary Medical Association (AVMA) agrees with the science and “discourages the feeding to cats and dogs of any animal-source protein that has not first been subjected to a process to eliminate pathogens.”

Dr. Wefer and Dr. Delaney, co-founders of Oakhurst Veterinary Hospital have banned RMBDs from their practice entirely. “Despite what the proponents of raw diets say about how natural it is for you dog, such diets pose health risks to your pet and your family. You see the warnings every day in supermarkets regarding safe handling of meats. This is because our processed meats are often contaminated with potentially dangerous aforementioned bacteria in addition to Campylobacter (responsible for food poisoning) and Shigella (responsible for diarrhea, fever). One simple break down in personal hygiene (hand washing) can lead to dire consequences when people are exposed to such bugs.  The risks far outweigh any advantage in feeding your pet raw food.”  Dr. Wefer said.

Dr. Delaney is in agreement with Dr. Wefer. “Considering the risk of infection from Salmonella and other bacteria, as
well as the added costs and extra time for preparation and cleanup, prohibiting raw meats in our practice is a good choice for the dog as well as the family,” Dr. Delaney added.

Oakhurst Veterinary Hospital is not alone. Other practices such as the Foster Hospital for Small Animals at Tufts University has permanently banned RMBDs due to the dangers they pose to pets as well as those who handle the food.

Such bans are not exclusive to the veterinary industry. The Delta Society – one of the largest and best-known organizations registering and insuring pet therapy volunteers and their companion animals – has banned them as well.  “Any dog or cat from a household where raw protein food is fed is not eligible to be a Delta Society Pet Partner,” the organization states.

As far as my two-cents is concerned – especially in regards to comparing a wolf diet with that of the dog as a selling point – it’s estimated that dogs have been ingesting cooked food remnants for about 400,000+ years. Likely, this is one of the key reasons why dogs have flourished and wolves haven’t.

Additionally, since dogs are scavengers by nature the likelihood that their ancestors enjoyed fresh large-animal kills such as beef or lamb are pretty slim. Ancestral diets likely consisted of days-old carcasses, tiny mammals and insects before man began farming and domesticating livestock. But, marketing a diet by featuring images of rats and insects is not aesthetically pleasing.

The author is The Director of Training & Behavior at Oakhurst Veterinary Hospital.